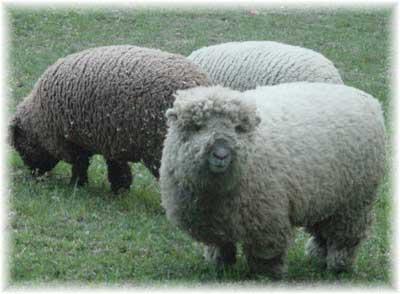 The Southdown breed of sheep originated in the South Down (hills) of Sussex County, England. The English farms kept these sheep for their flavorful meat and fine fleece. In the early 1800s the South Downs were imported to the United States. With the arrival of refrigeration larger meat carcasses were desired and the smaller sheep were crossed with bigger sheep to produce a larger animal. They are the South Downs of modern day. In 1780, John Ellman from Glyde, England, took the local sheep known as Southdown and systematically selected, developed and standardized them into what we now recognize as the considerably improved Babydoll Southdown.  Around 1990 small flocks of the original smaller South Downs were rediscovered and labeled Olde English Babydoll Miniature Sheep to differentiate them from the larger modern breed.

They are one of the oldest known down sheep. Today’s breeders believe breed preservation is of utmost importance and strive to keep this wonderful breed of sheep from forever being lost.

Babydoll Southdown sheep are known for their docile dispositions. For this reason, they are often kept as pets, but they are also used in a variety of ways such as grass mowers and weed eaters in vineyards and orchards and 4H projects. They are small in stature and are easy to handle. Their small size and efficient metabolism requires less acreage per animal compared to other breeds of sheep. Thus, they are referred to as being “easy keepers.” They are excellent mothers and are known for having multiple births. The Babydoll Southdown is known for its abundant carcass (relative to its size) and flavorful meat and is crossbred with lighter weight breeds of sheep to produce lambs of higher quality for market. They are also prized for their wool.

Head: The characteristics of the head give each breed its individuality and uniqueness. The Babydoll Southdown’s head should be wide and level between the ears, with no sign of a dark poll as the Babydoll is a polled (hornless) breed. Small, loosely attached or nubby scurs are sometimes seen on rams, which are considered a fault and discriminated against. Solid 1″ or larger scurs or horns are a disqualification. The head is medium length and moderately broad, but not so broad to be a birthing obstruction. Extremely broad heads are considered a fault and discriminated against. The ears set level with the head, neither drooping nor so upright they are perpendicular to the ground and should be covered with some degree of fleece.

Muzzle & Face: The muzzle is the area on the face that is covered with short fuzzy fleece and hair that is a shade from very light tan to brown to cinnamon to mousy gray color in the off-white fleeced sheep and black color in the black-fleeced sheep. The muzzle should be moderate in width to ensure efficient grazing, as well as moderate in length. It should be straight to slightly dished, but not Roman (arched) which is a breed disqualification. The wide muzzle gives the Babydoll sheep its classic smiling look and also makes it an efficient grazer.

Nose & Lips:  The nose and lip leather should be black, dark to light gray or bluish gray. Speckles are common and are acceptable but solid colors are preferred. Bright solid pink nose and lips, as are those without any pigmentation (pale white), are both breed disqualifications and the sheep cannot be registered. Please note that lambs often are born with pink noses and coloring will come with time.

Ears: The ears should be of medium thickness and moderate in length. They should be level with the poll (top of the head) – neither drooping nor perpendicular to the ground. The size should be in proportion to the head and covered with fleece. Short, rough hair is acceptable. However, slick ears are discriminated against. Black or brown-specked ear skin is common.

Eyes: The eyes should be large and bright. Their color should either be yellow or brown. Entropion, which is inverted eyelids, is discriminated against.

Neck: The neck should be moderately long and upright, wide at the base and flow smoothly into the shoulders without wrinkles in the skin.

Loin: The loin should be long, wide and thick.

Ribs: The ribs should be deep and wide, thick through the heart girth and well sprung.

Rump: The rump should be wide, of medium length, and relatively flat.

Tail: The tail head carriage should be high and in a line level to the chin when the sheep is standing in a natural alert stance.

Hindquarters: The hindquarters should be wider than the forequarters and have good width between the hipbones.

Thighs & Twist: The thighs and twist should show deep and heavy muscling.

Hooves: The hoof color should be black or gray and may have white stripes. Solid white hooves are a disqualification.

Height: All measurements are at the highest point of the middle of the shoulder and perpendicular to the ground on a sheep that has been shorn. Adult sheep should be between 18-24″ tall. Most Babydoll ewes fall into the 20-23″ range and most rams into the 22-24″ range. Sheep 17-18″ or 24-26″ are discriminated against, but can be useful in a well thought out breeding program. A sheep shorter than 17″ or taller than 26″ will be disqualified. These sheep may not be registered or shown as a Babydoll Southdown.

Skin: Of a delicate gray to bright pink on off-white sheep and of dark tones on black sheep.

Fleece: The fleece and hair covering around the eyes and cheeks to the muzzle should be short and not so thick as to ever cause the sheep to be “wool blind.” Tear ducts should not be too woolly. Both “wool blindness” and woolly tear ducts are discriminated against. Fleece should be fine, tight and dense with medium to medium-fine crimp that is soft and springy.  Most old-type Southdowns – by this we mean the off-white Babydoll Southdowns – are evaluated as having wool that is 1/2 to 3/8 blood.  1/2 blood translates to a 60 to 62-skein spin count and a fiber of 22.5 to 25 microns in diameter, with medium-fine crimp and a 2.5 to 3″ staple length.  3/8 blood translates to a 58-skein spin count and a fiber of 24.5 to 26.5 micron in diameter, with medium crimp and 2.5 to 3.5″ staple length.  Many of the black Babydoll Southdowns are 1/4 blood, which means that they have coarser fleece than the off-white Southdowns. They usually have a 27 to 31 micron count, medium-coarse crimp and 2.5 to 4″ staple length.  Typically the off-white wool is more valuable because it can be dyed any color.

If a sheep has predominately bright white fleece everywhere on its body including the fleece and hair on the muzzle and/or legs this is a breed disqualification. These sheep cannot be registered.

Black: Black is the color of the fleece at skin level in the lamb. Sometimes this color will fade to lighter shades of gray as the sheep ages, but it is still considered a black sheep. In some sheep, the sun may bleach the outer fleece to a light reddish brown color. This is only sun bleaching and is NOT considered a color.  The muzzle and legs of a black sheep should always be black.  The muzzle of a black sheep often get scattered gray hairs as they age.

Off-white fleeced sheep that have muzzles and legs that are a shade from very light tan to brown to cinnamon to mousy gray. Mottled shades of these colors (i.e. light and dark brown) are accepted but even colors are preferred.

Black fleeced sheep are born with black fleece, muzzle and legs.  Over time, the fleece should remain black to a medium gray at skin level, but a very light gray fleece will be faulted. The outer fleece on a black sheep may become sun bleached to a light reddish brown, but the sheep is still considered to be black.

Rams: Rams should look more masculine and are usually larger than ewes. They should be rectangular looking on a moderate frame. They must have both testicles descended. If one or both are not, it is a breed disqualification and the ram cannot be registered.

Ewes: Ewes should have a broad, well-attached, but not pendulous udder with two teats. She should be capable of producing and raising twins.

Rams and ewes should move with freedom of gait and remain active and sound for 8-10 years. Properly managed ewes and rams should be easy keepers and maintain thrifty condition without grain if kept on good quality pasture or hay with the exception of ewes that are lactating and lambs that are in their first six months of life. When selecting replacement-breeding stock, consider selecting for sheep with the genetics to produce sound conformation that provides easy keeping and easy birthing abilities to their offspring. Breeding for undersized sheep often produces poorly muscled and unthrifty lambs. Breeding integrity is of utmost importance.