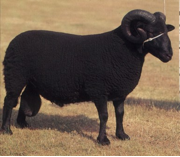 In the Middle Ages, the mutton of black-fleeced Welsh Mountain Sheep was prized for its richness and excellence and much sought-after by merchants. During the mid-19th century, some breeders began to select specifically for the black fleece color and the result is the Black Welsh Mountain sheep.

The Black Welsh Mountain is a small, black sheep with no wool on the face or on the legs below the knee and hock. It is the only completely black breed of sheep found in the United Kingdom. Introduced into the U.S. in 1972, the fleece from the Black Welsh Mountain has generated special interest among hand spinners and weavers.

Black Welsh Mountain Sheep are a small dual purpose breed that provides excellent mild mutton and a completely black, dense, durable fleece. Mature ewes average 100 lbs while mature rams can range from 132-143 pounds. There is no restriction on breed height but most purebred animals are relatively short, typically measuring between 20-30 inches at the shoulders. The ewes are polled and the rams have an impressive set of horns. The tails must be kept long and undocked in purebred animals.

The worldwide population of Black Welsh Mountain sheep is approximately 10000. They are found in England, Scotland, Wales and Ireland as well as the smaller North American population. A single importation in 1973 of 3 rams and 13 ewes by Mr. Tom Wyman forms the genetic basis of the North American flocks. One ram died in quarantine so we only have 2 main US sire lines. In the late 1990’s frozen semen from the UK was also imported adding needed genetic diversity to the breed in North America. Currently there are three rams from the UK whose semen has been imported. The current North American population numbers approximately 800 animals in over 50 flocks in the U.S. and Canada.

The fleece is a dark black or reddish black called cuchddu. The wool is black, short, dense and firm to handle and ranges in Bradford count from 48s to 56s or micron ranges from 26.4 to 32.69. Fleece weights in the UK range from 2.2-5.5 pounds. There is a good market for high quality spinning fleeces and wool products.

Black Welsh are hardy and the lambs are quick to their feet and vigorous. In the UK the purebred flocks average 175% per ewe with some flocks lambing well over 200%. The breed is also noted for it’s resistance to fly-strike and foot infections. They are ideally suited for the small holding or cottage farm where their hardiness, good mothering and feed efficiency are significant assets.

Black Welsh produces a superior meat retaining a mild flavor even in the older mutton. The yields are good with a favorable retail cuts to live weight ratio. They are particularly noted for their ability to produce high quality wool and meat on a forage based system with little or no grain inputs.