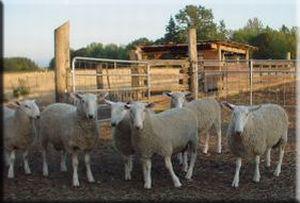 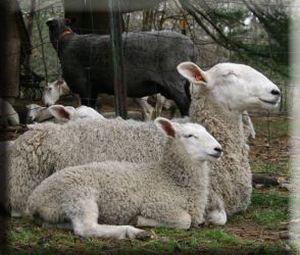 Sheep with long, lustrous wool have been in Leicestershire, England since the earliest recorded history of the British Isles, and are responsible for the improvement and development of other longwool breeds.  Robert Bakewell (1726-95) is credited with improvement of the Leicester sheep and also played an important role in the development of the Shire horse and Shorthorn cattle.

Characteristics of the Border Leicester

The Border Leicester has a regal, alert appearance.  Its head and legs are free of wool, and its arched Roman nose and long, erect ears give the Border Leicester a stylish, distinctive look.  This section describes the following characteristics:

Border Leicester wool is long and lustrous with a spinning count from 40s to 50s (38-30 microns).  The ideal fleece falls in well defined “pencil” locks with purled tips ending in a small curl, usually measures 6-10 inches after a year’s growth.  Border Leicester wool is long enough that they can be sheared once a year or twice a year.  The clean head and legs makes them an easy-to-shear breed.  Ewes average 8-12 pounds of grease wool annually.  And it’s not all grease! Border Leicester fleece often yields 70% wool after scouring, one of the highest of all.

How Big Are They?

Border Leicesters rank third in size among the longwool breeds. A ram at maturity should weigh 175-300 pounds and stand about 32 inches at the shoulder. He should have a wide, level back. Ewes usually weigh 150-225 pounds.  Border Leicesters are hardy and well muscled.  Ewes are prolific, excellent mothers and heavy milkers.  They are also good foragers and get along on less feed than many other breeds.  Border Leicester lambs are active and vigorous at birth.  They grow rapidly for the first four months and continue to grow for several years.  Border Leicester lambs fed for maximum gains often reach a trim 110 pounds by 4-1/2 months of age.  Those who prefer to grow out lambs more slowly can shear 2-3 pounds of skirted handspinning wool. Border Leicesters are generally calm and easy to handle, even though they are very aware of their surroundings.  A pleasant surprise for many is the gentlemanly disposition of Border Leicester rams.