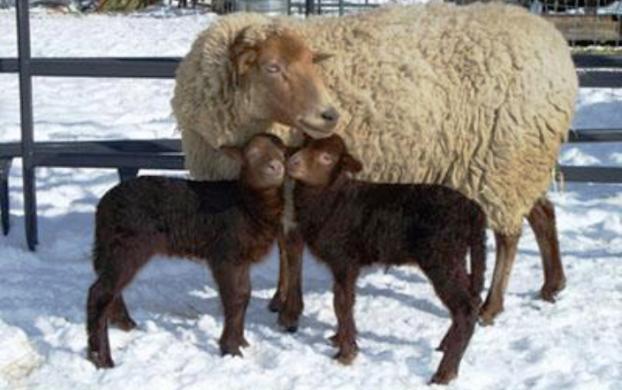 The history of the California Red Sheep began in the early 1970’s when Dr. Glenn Spurlock in Davis, CA embarked on a Home Project (not affiliated with UC Davis), of crossing Tunis and Barbados sheep.

Originally, Dr. Spurlock’s goal was to create a larger framed, wool-less breed of sheep. His efforts to obtain the wool-less feature failed, but the remarkable hybrid sheep caught the eyes of Aime & Paulette Soulier of Winters, California.

Through extensive efforts and selective breeding, the Souliers slowly increased the size of their flock and interested other sheep breeders including Alice Gardner of Dixon, CA. Over the years, their combined breeding efforts helped expand the scope of the program so that today there are more than fifty breeders throughout the US. To date, over 2,200 Reds have been enrolled in the California Red Sheep Registry since its inception.

The wool of this distinctive young breed is prized by hand spinners and weavers alike and the meat is unequaled in tenderness and delicate flavor. Additionally, the newly created California Red breed displayed a calm, gentle disposition, distinctive color, resistance to many of the health and handling problems and also proved to be a successful year round breeder.

California Reds are graceful and eye catching in appearance. The rams in can be rather striking with manes of red hair (as in photo) in contrast to their beige or oatmeal colored wool. The legs and head are free of wool and instead are covered with hair ranging from gold to dark cinnamon in color. Both the ewes and rams have a bold, strong expression accented by finely chiseled muzzles. Their long and slightly pendulous ears give them a deer-like appearance when alert and at attention.

Considered medium-sized sheep, when mature the rams weigh 225-250 pounds on average; and the ewes range from 130-150 pounds. Though alert and athletic, both rams and ewes are known for their gentle easy going temperaments and responsiveness to quiet handling. Both sexes are naturally hornless.

The ewes are very patient but possessive mothers that instinctively care for the needs of their young. Ewes bond well with their lambs and can be quite defensive of them when needed. While yearlings can often give birth to single lambs, twins are not uncommon. As the ewes mature, and with successive lambing, twins (and occasionally multiples) are usually born along with plenty of milk available to feed the lambs. The belly and udder areas are pretty well free of wool so that even the most timid lambs are able to nurse easily.

Fran Ebbers California Red Sheep Ewe with lambsLambs are born a solid rust or cinnamon red color. As they mature, the hair color that is retained on the legs and head can range from gold to dark cinnamon. The wool, as it grows out on the young animal, turns to beige or oatmeal in sharp contrast to the richly colored wool-free head and limbs. This transformation appears around 12-18 mos old or earlier depending on shearing.

The California Red is an easy keeping breed that, when fed a balanced pasture grass and/or hay diet, does not require heavy graining to reach market weight. Depending on the region, weather conditions and type of wool market, California Reds are usually shorn once a year, just prior to lambing. Though the breed originated here in California, they have been successfully ranged in extremely harsh weather area ranches in Canada, Colorado, Idaho and throughout the United States.

WOOL is beige or oatmeal colored with hairs, ranging from gold to dark cinnamon red, intermixed throughout. Due to the silky feel of the wool, along with the unique visual texture of the contrasting hairs, it is no surprise that it is sought after by hand spinners and weavers. The staple length is usually three to six inches and measures in the 50 to 60’s by the Bradford count, 30’s micron count.

TROUBLE FREE BREEDING & LAMBING –The reproductive characteristics of California Reds are also quite favorable. The rams are very active even in the hot summer months making year round breeding an option for many sheep raisers. The quiet, gentle and dedicated mothering nature of the ewes results in very few lambing or lamb-raising problems. Due to ample milk production, nursing lambs have very good weight gain even though twins are normally produced.

MEAT — The meat from California Reds is unequaled in tenderness and taste. Along with a delicate flavor, their meat also contains significantly less fat than that of the more common sheep breeds. High quality meat production along with year round breeding is a winning combination for any sheep raiser, large or small.

MILK – The milk from California Red sheep has been found to be high in milk solids and their calm demeanors make them excellent candidates for inclusion in small/home dairy operations.