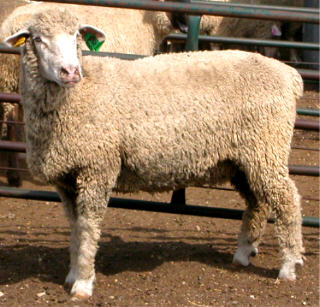 The Columbia is truly an All-American breed, the first to originate in the United States. Columbias were developed in 1912 from Lincoln and Rambouillet crosses. The object of the cross was to create a breed that produced more pounds of wool and lamb and could replace crossbreeding on the range.

Though originally bred for range conditions, the Columbia has found widespread acceptance throughout the United States and is used increasingly to sire crossbred market lambs. Columbias are one of the larger-sized breeds. Rams weigh between 225 and 300 lbs (100-135 kg) and females weigh between 150 and 225 lbs. (68-102 kg).

Columbia sheep were developed by the United States Department of Agriculture in 1912 as a true breeding type from long wool rams and Rambouillet ewes to produce large ewes yielding more pounds of wool and more pounds of lamb. The first cross Lincoln-Rambouillet line was the most promising of all crosses and this became the source line of Columbia. The original cross was made at Laramie, Wyoming, and the Foundation of the Government Columbia flock was moved to the Sheep Experiment Station at Dubois, Idaho, in 1918.  While they were originally developed for range conditions, they have adapted to other regions as well

Fleece – Columbia ewes should shear an annual fleece of at least 12 pounds. The fleece should grade 1/2, 3/8 or 1/4 blood of staple length for grade but not show a greater variation than two grades and not show medulated or colored fibers.

Head – Hornless and free from wool blindness, moderately long ears covered with an even covering of white hair or very short wool. Hair on face and ears should be white; occasional small black spots are permitted on ears. Small spots of colored pigment are permitted on nose.

Neck – Medium, neatly attached and full, and preferably free from wrinkles and folds.

Shoulders – Wide, meaty, tightly laid on top and even with backline.

Rump – Long and wide with dock carried well up.

Thighs – Thickly muscled and well filled in the twist.

Legs – Set squarely under sheep, heavily boned and covered with white hair below the wool line.

Hoofs – May be either white or black.