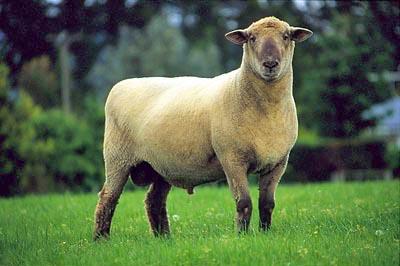 The Dorset Down originated in England around 1800 by mating Southdown rams with the large Hampshire Down, Berkshire and Wiltshire ewes. The Dorset Down is a solid, medium sized, dark-faced, polled sheep. It has a short, close white fleece with wool round the cheeks, between the ears, on the forehead, and down the legs.

The wool is generally of high quality. The breed produces early maturing lambs and as such is an ideal terminal sire. Ewes will take a ram in most months of the year, making the breed ideal for the Christmas or early spring lamb market when prices are at a seasonal high. Carcass conformation is good with fine bone and shoulder, being well fleshed with delicately flavoured tender meat.

Dorset Down Sheep are justly known as “king of the prime lamb breed”.  One of the oldest breeds of native sheep, Dorset Down Sheep have a prestigious history as well as a successful future in the British farming landscape.   The Dorset Down is renown for producing early maturing lambs from grass, making them ideal for organic, and other extensive farming systems.  The Dorset Down Ram is also proven as the ideal Terminal Sire to virtually any other breed of sheep making it the ideal solution for modern, commercial flocks. 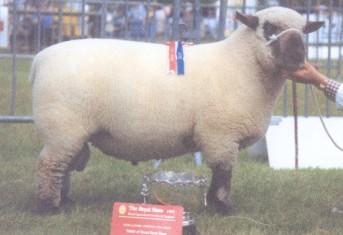 In the 1980’s 43% of Britain’s ewe population was mated to a ram of a “Down” breed but the introduction of well advertised foreign breeds meant the Dorset Down, in common with many traditional breeds, saw a reduction in demand and flock numbers. However, the increasing market demand for “real food” and recent CAP reform has meant that the Dorset Down has return to the fore as the ideal solution for the production of premier quality lamb.  Its suitability to extensive and organic farming systems has also driven demand for the breed.

A Dorset Down ram can be used with confidence on any breed of ewe, and many farmers using Mule and hill ewes have been impressed by the much improved conformation of their lambs when sired by a Dorset Down.  Difficult lambing cases will be eliminated even when used on lambs because of the small head and fine shoulders.  The lambs are very hardy at birth, vigorous and ready to suckle.

Dorset Down rams will work at any time of the year, and because of their exceptionally high pheromone count, also make very good teasers.

The Dorset Down ewe will take the ram in most months of the year, is apparently unaffected by extremes of temperature and being docile and adaptable is ideal for close winter housing.  Its usual to put 40 to 50 ewes to one ram which is quite capable of serving some 20 ewes in 24 hours.

EARLY MATURING:  The Dorset Down sire has no equal for early mature lamb production and produces an ideal carcass regardless of the sex of the lamb.  Single lambs can be brought up to 18kg dressed carcass weight within 10 to 12 weeks, twin lambs to the same weight within 12 to 14 weeks, while a good lamb gains up to 0.45kg per day live weight.

It has been shown that a properly managed commercial flock using a Dorset Down ram can clear all lambs by 16 weeks from lambing.

CARCASS CONFORMATION: The Dorset Down produces a lamb with fine bones and shoulders, well fleeced with an outstanding leg and is ideal for home or export trade, grading E.U.R. at 2-3L.  The loin is perfectly covered with a full eye of meat and the shoulder is of particularly good flavour.

FLEECE:  The Dorset Down fleece is one of the most highly valued British fleeces.  The wool is short and fine in texture on mature sheep, while good tight wool on the lambs resists bad weather.  Fleece weights range up to 2.177kg washed and up to 2.450 kg greasy.  The British Wool Marketing Board classes Dorset Down wool as one of the highest grades in the country; considerable quantities of it go to the hosiery trade.