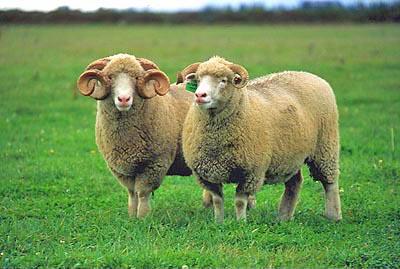 Dorsets are best known for their ability to produce a lamb crop any time during the year. History tells us that centuries ago when Spain wished to conquer England, Merino sheep were brought into southwest England and crossed with the Horned Sheep of Wales. The result was a desirable, all-purpose sheep that spread over Dorset, Somerset, Devon and most of Wales.

The first Horned Dorsets were brought to the United States in 1885. In 1948, a dominant gene for polledness occurred resu

lting in Polled Dorsets which are now popular in the farm flock states. Dorset ewes are prolific, heavy milkers that produce lambs with moderate growth and maturity that yield heavy muscled carcasses.

The Dorset Horn sheep is one of the earliest recorded breeds of British Sheep with the first Flock Book being established in 1892, and its adaptability was soon recognised world wide.

The Australians, noted for their shepherding skills, soon realised the potential of the sheep to improve their existing stock and imported the Dorset Horn. With their vast acreage and minimal management techniques the viability of producing a hornless Dorset was of prime interest. This they achieved and the Poll Dorset emerged to provide the sheep now so much in demand throughout the world.

In the mid 1950s a far sighted Dorset breeder, “Bunny” Lenthall, decided to investigate the potential of the Poll Dorset and, after a visit to Australia, returned with two stud rams. In the UK the Poll Dorset now out numbers its illustrious ancestor but all the attributes of the Dorset Horn still apply to both.

Today the breed has moved on retaining all the same characteristics but it is assisted by up-to-date techniques of record keeping such as that provided by Signet. Now with a recently introduced Sire Reference Scheme the breed is developing further to provide even better breeding stock and conformation to fulfill market needs.

The Association’s first Patroness in 1892 was Her Majesty, Queen Victoria, and with this strong foundation it has grown world wide to promote the breed internationally via shows and the media to maintain the breed’s profile.

1 thought on “Horned and Polled Dorset”