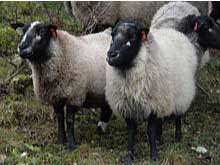 The sheep are a very rare breed of Norwegian Landrace sheep that gets its name from the region they come from: Trondelag, where the city of Trondheim is located.  The breed emerged in the late 19th century after the extinct Tauter sheep were crossed with native, feral, landrace sheep.  There are around 400 breeding Gra Trondersau ewes remaining today, and only 25 breeding rams

Both rams and ewes are polled and they range in size from 150-200 lbs, rams being the heavier of course.  They are good mothers and often twin, but not always, so population growth is slow.  The breed has a distinct herd instinct.

Not necessarily grey, Gra Trondersau come in shades of black and grey with bits of moorit and white occasionally thrown in for good measure.  The fleeces are fairly uniform in texture, with very dense, fine, springy locks – color does vary a bit – averaging 32 microns.  There is some kemp but it should be limited to the legs and neck.  It’s quite a lovely fleece, traditionally it’s used for wool blankets and rugs, but it’s soft enough for sweaters as well.