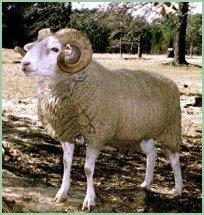 Spanish sheep first arrived in Florida in the 1500’s. Later importations of Spanish and other breeds of sheep mixed with the earlier population, all evolving under the strong natural selection of the native range conditions of Florida and the other Gulf Coast states. Today a remnant of this population survives and is known as the Gulf Coast.

Gulf Coasts are best known for their resistance to internal parasites. The Florida Agricultural Experiment Station in Gainesville has a flock which has been maintained without the use of anthelmintics since 1962. The Gulf Coast Native is classified as a “critical” breed by the American Livestock Breeds Conservancy.

The American Sheep Industry Association considers the Gulf Coast Sheep one of the oldest breeds of sheep in North America.  Little is known about the breed before the nineteenth century though they are known to have existed for centuries.  It is believed that these sheep developed from sheep that the Spanish first brought to the southeastern United States in the 1500’s.  As late as 1717, 2500 Spanish sheep were brought from Mexico City to Los Adaes near Natchitoches. Louisiana.  Importations of French sheep and possibly other breeds may have mixed with the Spanish sheep. Descendants of these sheep developed largely through natural selection under humid semitropical range conditions in the Gulf Coast areas of East Texas, Louisiana, Mississippi, Alabama, Georgia and Florida. Prior to World War II hundreds of thousands were allowed to free range in unimproved pastures, pineywoods and sugar cane fields. Twice a year they were rounded up for shearing and to mark lambs. After World War II the emphasis on high input agriculture caused the sheep industry to turn to breeds of sheep which were larger in size and produced more wool and meat. This caused the numbers of Gulf Coast sheep to decline dramatically endangering its very existence. Now, with renewed interest in low-input sustainable agriculture interest in Gulf Coast sheep is reviving. These sheep have been known by various names such as Florida Native, Louisiana Native, Common Sheep, Woods Sheep, Native Sheep or Pineywoods Sheep. Remnants of these sheep survive today and are known as Gulf Coast Sheep.

Typical Gulf Coast Sheep are small to medium sized with adult rams weighing 150-190 pounds and adult ewes weighing 100-140 pounds. Most sheep are white to tan in color although on rare occasions one may be light or dark brown or black. Sheep may have some rust speckles primarily on the face and legs. They have open (wool free) faces, legs and bellies. Both sexes may be polled (hornless), horned or have scurs.

Studies at the University of Florida and Louisiana State University found the presence of factors in Gulf Coast sheep that infestation of some gut parasites, in particular Haemonchus contortus. Trials conducted at Alabama A&M University in 1997 came to similar conclusions. In this study Gulf Coast Sheep had one eighth of the fecal parasite egg count (Haemonchus contortus, Ostertagia circumcincta and Trichostrongylus spp.) than Suffolk sheep under similar conditions. Some flocks have been maintained for many years without the use of dewormers. The University of Florida flock was maintained this way for more than thirty years.

Gulf Coast Sheep have a well-documented resistance to footrot, based on the experiences of many breeders including those at research universities.

Gulf Coast Sheep have become so adapted to the high heat and humidity that temperatures of more than 100 degrees will not interfere with breeding. Some of these sheep have also become acclimatized to temperatures as low as 60 degrees below zero.

Grease fleece weights range from 4-6 pounds per ewe.  Average fiber diameter is 26-32 microns. Spinning count is 48-58.   Gulf Coast fleeces are usually soft, open, low grease, wavy to crimpy and 2.5 to 4.0 inches staple length.  This makes them suitable for many uses.  Hand spinners say it is a delight to select fleeces for projects they have planned.  It makes great fabric, blankets or knitted projects (sweaters, etc.) since it is not harsh to the skin.  It also felts really well for making hats or felt pieces for sewing.

Gulf Coast lambs raised on their mother’s milk and pasture are lean and succulent.  Carcass weights are usually light with little waste.  The meat is delightfully mild and can be prepared in many ways.

Milk has twice the solids than either cow or goat milk therefore will produce more butter and cheese per gallon of milk. Butterfat content is in the 8% range. Milk also has a higher lactose content causing the milk and the butter to have a sweeter taste.

Gulf Coast ewes are able to produce three lamb crops in two years and will average 150% lamb crop per year. Lambing rates are similar to that of other breeds (70% single, 30% twins and occasionally triplets). They produce a high percentage of live lambs and a high ratio of finished lambs per ewe mated.