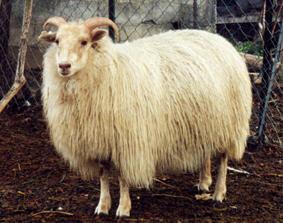 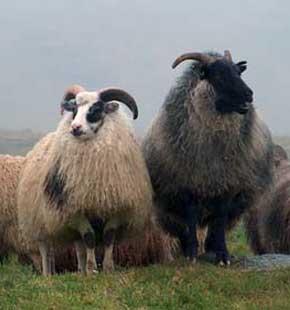 The modern Icelandic Sheep is a direct descendant of the sheep brought to Iceland by the early Viking settlers in the ninth and tenth century. They are of the North European Short Tailed type, related to such breeds as the Finnsheep, Romanov, and Shetland. A major gene controlling prolificacy has been identified in the Icelandic breed. This gene exhibits action similar to the gene found in the Booroola Merino.

The fleece from Icelandic sheep has an inner and outer coat typical of the more primitive breeds, and it is the wool for which Iceland is known. It is illegal to import any sheep into Iceland.

The Icelandic sheep is one of the world’s oldest and purest breeds of sheep. Throughout its 1100 years of history, the Icelandic breed has been truly triple-purpose, treasured for its meat, fiber and milk.

The Icelandic breed is in the North European short-tailed group of sheep, which exhibits a fluke-shaped, naturally short tail. To ensure the continuing purity of the breed, tail docking an Icelandic will disqualify it from being registered in North America. Icelandics are a mid-sized breed with ewes averaging 130-160 pounds, and rams averaging 180-220 pounds.

Conformation is generally short legged and stocky. The face and legs are free of wool. The fleece is dual-coated and comes in white as well as a range of browns, grays and blacks. There are both horned and polled strains. Left unshorn for the winter, the breed is very cold hardy.

A gene has been found in the Icelandic breed that causes multiple births of triplets, quads, quints and even sextuplets, if the ewe carries two copies of the gene. One copy of the gene causes a milder increase in fertility, resulting primarily in a higher rate of triplets. The Thoka gene, as it is called, is named after the first ewe known to carry the gene. It is similar to the Booroola gene in the Merino sheep.

Ewes are seasonal breeders, most coming into heat in late October. They will continue cycling until spring if not bred. Rams are sexually active year round, and the ram lambs can start breeding at 5-6 months.

Lambs mature early and ewe lambs commonly lamb at 11-12 months of age. Icelandic ewes are bred as lambs, and many remain productive until age 10 or longer.

Prolificacy is quite good, on average 175-220%. Triplets are not uncommon and many Icelandic ewes are very capable of nursing triplets without assistance.

The lambs are small, twins averaging 6-8 pounds and very lively after an average gestation of 142-144 days, several days shorter than the species average. Lambs are vigorous at birth, a trait that has been shown to carry through in crossbreeding programs. The first lamb born will commonly be up and nursing before the twin arrives. Experienced mothers can have a lamb nursing even before it has gotten to its feet. Lambs are generally strong enough to suck out the wax plug, and are seldom lost to pneumonia.

Due to their large rumens, and the selective pressures of their history in Iceland, the breed is feed efficient. The animals are cold hardy and have a strong, reactive immune system. The sheep have evolved over 1,100 years under difficult farming conditions in Iceland, with a resultant sturdy and efficient constitution.

A defining quality of the Icelandic breed is the ability to survive on pasture and browse. Historically, Iceland is not a grain producing country due to the climate, and the breed has survived through its thousand year history on pasture and hay. The ewes are supplemented with fish meal when pregnant and most ewe lambs here in North America are supplemented with some protein especially when pregnant. On good grass, meat lambs can be slaughtered directly off the pasture at 5-6 months of age.

The most eye-catching aspect of the breed is the variation of colors and patterns. Genetically, Icelandics have one of two base colors, either black or moorit (brown). They exhibit 5 pattern combinations: white, gray, badgerface, mouflon and solid. Individual sheep may also display various shades of these colors/patterns, ranging from white, cream, light gray, tan, caramel, milk chocolate, silver, dark chocolate, dark gray, to jet black. A spotting gene adds even more combinations with many recognized and named patterns of white markings.