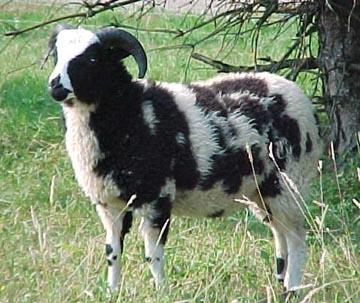 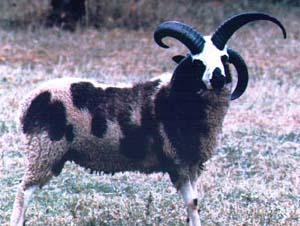 The Jacob is a unique breed. Their most striking features are their four horns, two vertical center horns and two side horns curling along side of the head, and their spotted black and white fleece which is prized by hand spinners and weavers. The Jacob is an old, unimproved breed whose origins are obscure to say the least. Some say they are the result of the earliest recorded selective breeding as referenced in the Bible.

Others claim they descend from Moorish sheep brought from Spain or Africa or from Norse sheep from Scandinavia and the northern Scottish islands. Jacobs came to Britain via the Iberian Peninsula and have been raised there for over 350 years. Until recent times, Jacobs were kept at only a few large estates in England and thought to be in danger of extinction, but they are making a comeback. The Jacob is classified as a “rare” breed by the American Livestock Breeds Conservancy.

Jacob Sheep have graced the large estates and country homes of England for many centuries. Their impressive horns, black and white faces and spotted bodies have no doubt contributed to their popularity and survival.

Their actual origins are not known. However, documentation throughout history indicates that the spotted or pied sheep may have originated in what is now Syria some three thousand years ago. Pictorial evidence traces movement of these sheep through North Africa, Sicily, Spain and on to England.

There are many romantic stories about the Jacob Sheep being direct descendants of the flock of sheep acquired by Jacob during the time he worked for his father-in-law as mentioned in the Bible (Genesis 30), or that they were washed ashore from shipwrecks during the attempted invasion of the Spanish Armada during the reign of Elizabeth I.

Importation of Jacob Sheep to the U.S. and Canada has occurred in small numbers since the early 1900’s. These have been dispersed all over the continent and many were crossed to other breeds. These crosses have been referred to as Jacobs, even though many bear no resemblance to the breed except that they exhibit spots and multiple horns. Other breeds of sheep do produce spotted lambs and/or polycerate offspring. Just because a sheep is spotted or may be polycerate does not mean it is a Jacob Sheep.

The American Jacobs are an old world sheep which, unlike many other old world breeds, have not undergone improved breeding and out crossing to satisfy the commercial marketplace. They have a more primitive body shape, are slender boned and provide a flavorful, lean carcass with little external fat. The carcass yield from hanging weight to freezer is high when compared to the more improved breeds.

Due to finer bone structure and less body fat, stocking rates on pasture are higher than the modern breeds with 25% to 50% increases being reported. Ewes require less supplement feed during times of increased nutritional need and lamb easily, usually with no assistance. The lambs are up and nursing vigorously without help. Jacob ewes are included in commercial flock in England due to their hardiness, ease of lambing, strong mothering instincts. Both rams and ewes are easily kept and have a resistance to parasites and foot problems. The fleece is soft and open and light in grease, making it highly sought after by handspinners.

The Jacob is highly marketable as breeding stock. Farm gate sales of freezer lamb, tanned pelts, handspinners’ fleeces, horns for walking sticks and buttons, bring the breeder financial return as well as the pleasure of seeing this handsome breed on the farm.

Jacob sheep have both black and white wool. These different colored patches of wool should be clear and distinct in color. Some individual animals tend towards a grayish cast in their black wool. This color is frequently referred to as “lilac.” The spots in a purebred Jacob should never fade to the point where they become obscured.

Body conformation of Jacob sheep is frequently described as “goat-like”, with a small, fine-boned appearance. The ears are erect – never pendulous. The legs and face forward of the horns should be free of wool.

The Jacob is ALWAYS horned. There is no such thing as a polled purebred Jacob! This is one of the reasons that dehorning is prohibited. While it is preferred that the sheep have an even number of horns, well-spaced and attractive, animals with less-than-perfect horn patterns are perfectly normal and acceptable. Horns are always black or black and white striped; never all white.

Jacob sheep have one of the widest variations in fleece types of any breed. Although a wide variety of fleece types is acceptable in the breed, a good fleece is free from kemp, or nearly so; and of uniform crimp throughout. A quality soft fleece, which is ideal for handspinning, carries little grease. (Some Jacob fleeces are coarse and hairy, which renders them unsuitable for handspinning use.)

It is important to bear in mind that there’s more to a Jacob than just spots and horns! Conformation and size are also very important in distinguishing a good Jacob sheep!

It is important to bear in mind that the “perfect sheep” does not exist. A responsible registry has the task of registering all acceptable candidates based on their breed purity, NOT on their relative closeness to any ideal of perfection! There are, however, some traits which are undeniable incorrect for the breed and seriously challenge the likely purity of the sheep or are so far outside of the norm for the breed that the individual is simply not acceptable.