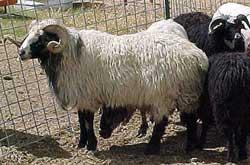 The Karakul may be the oldest breed of domesticated sheep. Archeological evidence indicates the existence of the Persian lambskin as early as 1400 B.C. and carvings of a distinct Karakul type have been found on ancient Babylonian temples. Native to the plains of Central Asia, Karakuls differ radically in conformation from most other American breeds. They are of the fat broad tailed type of sheep. In their large tail is stored fat, a source of nourishment, similar in function to the camel’s hump.

In Central Asia and South Africa , large flocks of Karakuls are still raised for pelt production from very young lambs. The skins of baby lambs with their tightly curled wool are used in the “Persian lamb” fur trade. Karakuls were introduced to the United States between 1908 and 1929. They are a specialty breed in the U.S. Their fleeces, long and colorful, are prized by hand spinners. Karakul wool is the wool upon which the art of felting evolved. The Karakul classified as a “rare” breed by the American Livestock Breeds Conservancy.

The Karakul sheep is a type of fat-tailed sheep, very common to the African and Asian continents, but considered a rare breed in the US and Canada.

The Karakul has some unique qualities.  It has a dominant black gene, so a very high percentage of these sheep are born black.  A desert animal (originally) that stores fat in its tail for nourishment in lean times, it is very hardy and adaptable.  The pelts of the Karakul lambs are historically referred to as “Persian lamb” or “Broadtail”.  This pelt is a lustrous coat of intricately patterned curls.  They were legendary trade items on the ancient Silk Road of China, and were used extensively in America (for the first part of the 1900s) as a fabric for coats, jackets, and hats.  For these reasons, the Karakul is often known as the “Fur Sheep”.

Their devoted shepherds love their exotic carriage, intelligence, hardiness, common-sense instincts, beauty, and independence.  And of course, their rich history, which is unparalleled by any other breed of sheep!

History of the Karakul

The Karakul is possibly the oldest breed of domesticated sheep.  Archeological evidence indicates the existence of the Persian lambskins as early as 1400 B.C., and carvings of a distinct Karakul type have been found in ancient Babylonian temples.  Although known as the “fur sheep”, the Karakul provided more than beautifully patterned silky pelts for its owner.  These sheep also were a source of milk, meat, tallow, and fiber.  The wool of the adult Karakul (a very strong fiber) was felted or spun into fabric for garments, footwear, carpets, and yurts, among other uses.

The Karakul is native to Central Asia and is named after a village called Karakul.  Karakul lies in the valley of the Amu Darja River in the former emirate of Bokhara, West Turkestan.  This region is now known as Uzbekistan.  It is one of high altitude, with scant desert vegetation and a limited water supply.  This made for a difficult life, which imparted to the breed a hardiness and an ability to thrive under adverse conditions.  This is distinctive of the modern Karakul.

Karakuls were first introduced to the United States between 1908 and 1929.  Pelt production was the goal, but very few animals were obtained.  It was of course necessary to cross them with other breeds to obtain the quantity of pelts required by the fledgling industry.  The first cross produced quality fur pelts, but there was an inadequate number of purebreds to guarantee the success of the industry.  Eventually the flocks were dispersed, and many of the original rams were lost.  The introduction of other breeds into the bloodlines has resulted in wide variations in body type and fleece characteristics.  This lack of uniformity is apparent also in the native flocks.  It is interesting, however, that the true Karakul traits that are so unique to the breed continue to persist even though other breeds have been introduced.

This has left us with a type of sheep having a rather wide definition, but it cannot be argued that the characteristics which Karakuls have in common with each other are distinctive and make them quite different from any other sheep breed found in the US today.

Characteristics of the Karakul

Karakuls are medium-sized sheep, but they differ radically in conformation from many other breeds.  They are considered a fat-tailed (or broad-tailed) sheep, but theirs is not always an extreme version of such.  We see a great variation in the size of the tail among individual sheep.  Karakuls, like most sheep, are born with a long tail.  The upper half contains a sack which begins to fill up with fat as soon as the animal is born.  This section of the tail has fleece on the outside and smooth skin on the underside.  The lower half of the tail is an appendage that is covered with fleece/hair.  They can point straight down, or, as some do, curve back up (similar to an “S”).  Some breeders leave the entire tail intact, while others choose to dock the lower portion.  The upper half is never removed, however, as its purpose is nutrient storage (similar in function to a camel’s hump).

The Karakul ram can weigh between 175-225 pounds (80-100 kg), while the ewes range from 100-150 pounds (45-70 kg).  They stand tall, with a long, narrow body.  The top line is highest at the loin, with the rump long and sloping, blending into a low-set tail.  The head is long and narrow, slightly indented between the eyes, and often exhibiting a Roman-type nose.  The ears are usually long, but can range from large to tiny, and can even be absent.  They typically point downward and slightly forward.  The long neck is carried semi-erect.  The legs are medium to long and often light in bone.  Rams can be polled or horned; horns vary from short to large outwardly curved spirals.  Ewes are generally hornless, but not necessarily.  Wattles can also be found on some individuals.

The Karakul is distinguished by its colored fleece, which is due to a dominant black gene.  Most lambs are born coal black with lustrous wavy curls, with the face, ears, and legs usually showing smooth, sleek hair.  As the lamb matures, the curls open and lose their pattern, and eventually the color will evolve as well.  This usually occurs within the first year, and the resultant color can be almost anything:  silver blue, gray, golden tan, reddish brown, white with flecks of other colors, and occasionally pure white.  The most common, however, is a simple brown or bluish gray, with the gray increasing as the animal ages.

Many adults (in the US) have a double coat:  a fine “down” undercoat covered by a coat of guard hair.  Many will have a fleece as glossy as their lamb coat.  There is great variability in the fleece types of both coats, ranging from “horse-tail” coarse to silky soft.  The adult fleece is a light-weight, high-volume, strong fiber fleece that (at its best) is long and lustrous, usually with no crimp. Classified as long-stapled (average is 6-12 inches per year), the fleece lacks a high grease content. It is easily spun with little preparation, and produces a superior carpet yarn that is often used for rugs, saddle blankets, and outer garments.  It also has excellent felting ability.

Karakuls, while desert sheep, are adaptable to various climates.  The harsh conditions under which they evolved has given them strong and lasting teeth, a key to their longevity.  They are resistant to internal parasites as well.  Their hooves are sound, being susceptible to foot rot only if restricted to wet marshy ground.  While they respond to good feed and care, they are excellent foragers and can graze marginal land or survive a season of scant food which might kill ordinary sheep.  They withstand extremes of either hot or cold, but they do seem to appreciate the choice of dry cover.

Karakuls also breed out of season, making it possible for three lamb crops every two years.  Single lambs are the rule, although twins are not uncommon.  The ewes are very protective and attentive mothers.  This, combined with easy lambing due to the long, narrow heads and slender shoulders of the lambs, results in a higher-than-average lamb survival rate.  Karakuls possess a strong flocking instinct, and can be run on open range as well as in fenced pastures.  When faced with danger, they will join together in a circle with the lambs in the middle.  They do not herd well, however; herding dogs find them a great frustration.