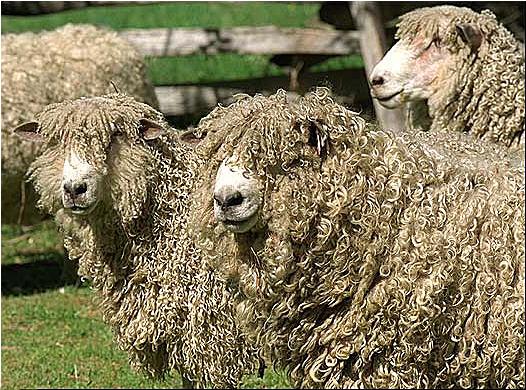 The Leicester Longwool was important to the development of other long wool breeds and has made a large contribution to the sheep industries in Australia and New Zealand. The breed originated in the Leicester region of England and although it is a very old breed, Robert Bakewell, a pioneer in the field of animal genetics, is given credit for improving it during the 18th century.

Leicesters are a big sheep with a heavy fleece of curly, lustrous wool that is even in length and fiber diameter. The breed was first imported into the United States during the time of the American Revolution, and it is believed that George Washington used Leicester sheep to improve his flock at Mt. Vernon. The Leicester Longwool is classified as a “rare” breed by the American Livestock Breeds Conservancy.

At “Dishley Grange” farm in  Leicestershire, England, visitors today can still see signs of the innovative farming techniques of a pioneering 18th century farmer named Robert Bakewell. Recognizing that with selective breeding he could make changes over time to the traits of his livestock, he made profound improvements to hogs, horses and his prized longhorn cattle. But his triumph was the Leicester Longwool sheep, which has since played a vital role in the development of many of our familiar modern sheep breeds.

A large framed, dual-purpose sheep carrying a heavy long-stapled fleece, the Leicester Longwool is a sturdy, efficient and adaptable breed. Making good use of marginal forages they can thrive in a wide variety of climatic conditions. Rams average 250 lbs, and ewes 180 lbs. Ewes are good mothers giving plenty of rich milk, with a lambing percentage of 120-150% and higher in selected flocks.

Founding fathers George Washington and Thomas Jefferson both had large flocks of sheep and took pains to bring in good Leicester rams from England to improve their stock.

World travelers, Leicester Longwools have been exported to mainland Europe, North and South America, Australia and New Zealand. In 1826 the Leicester Longwool was one of the first pure breeds to be imported into Australia. Today it is known there as the “English Leicester,” and is valued as a crossing sire to improve the carcass qualities of finewool breeds.

Head and Face: Head carried strongly, not too high, and set on a short, thick neck. Head is neat and cleanly chiseled, wide between the ears and tapering slightly to the nostrils. There should be no sign of horns or scurs. Forelock should be present but not overly abundant, and should have a texture similar to the wool of the body. Face cover should be limited, and is more present in young animals than older ones. There should be no tendency for wool blindness. The face has a wedge shape and is covered with short white hair, which should be cleanly white with no trace of gray or sandy pigment uniformly distributed throughout. Isolated discrete spots of black hair on face and ears are not objectionable. The white hair over dark skin gives the desired overall appearance of blue. Muzzle is strong and wide, with teeth meeting the dental pad evenly. Eyes are full sized, bright and clear. Ears are blue (white hair over gray skin), fine, and fairly long, set on the side of the head and carried horizontally. Black spots are allowable on the ears.

Comment: The head is an essential component of the breed type, and the ear carriage, shape, and degree and character of hair and wool on the head all reflect this. In addition the head is a component of soundness. Wide mouths with even teeth are better able to consume grass.

Neck: Neck is short to medium length, is strong, and is level with the back.

Comment: The neck carriage and style are a part of breed type and set the Leicester Longwool apart from other related longwools which have a higher neck carriage.

Comment: The shoulders are a part of the wide, thick conformation that is typical of the breed. A dip, or “mutton withers,” is objectionable since it is functionally weak and allows for degradation of wool between the shoulders.

Chest: The chest should be deep and wide and the breast prominent.

Back: The back is wide and level. It is well filled behind the shoulders, resulting in great girth and thickness through the heart girth. The back carries firm even flesh. The loin is long, wide and deep.

Ribs: The ribs are well sprung, giving the barrel great capacity for lungs and digestive organs.

Hindquarters:  The rear quarters are full and square, with no tendency for a narrow rear. The legs are well muscled and full. The tail is set on well and is nearly level with the back. Tails are ideally docked with too short a dock discouraged.

Legs and Feet: The legs are straight from the back and front view, are tightly attached and are set wide apart. The legs from hocks and knees down are covered with short white hair or a combination of hair and wool. The hair and wool on the legs is ideally free from gray, rust or sand color, although some animals have discrete black spots. From the side the limbs have correct angles at shoulders, stifle, hip, hock and pasterns. The cannon bones are short, and the pasterns upright without being too steep. The hooves are black and tough and are resistant to foot rot.

Comment: Leicester sheep should be large, robust, square sheep, as reflected in the chest, back, ribs, hindquarters, legs and feet. They should be thick throughout, with great body capacity. Length, width and squareness are all important and typical of the breed, although the sheep can become too extremely square and wide and as a result can have poor mobility.

Skin: The skin of the body is a healthy pink color, with the occasional black or gray spot not penalized if these spots grow white wool.

Comment: Leicesters have heavily pigmented facial skin, and with that comes a tendency for pigmented skin throughout. This pigment is not objectionable unless it is associated with pigmented wool on otherwise white individuals. Pigmented skin tends to increase as sheep age so that very old sheep are likely to have grayer skin than younger sheep.

Comment: Functional movement is the key to the sheep being able to use pasture effectively and is a critical component of the breed type.

Constitution and General Appearance: Leicester Longwool sheep are alert and robust, and have style and character. They should be active yet docile and easily handled.

Comment: Docility and ease of handling are important components of breed character.

Reproduction: The udders of ewes should be tightly and well attached, symmetrical and with even texture throughout. Extra teats are moderately objectionable. The testes of the male should be symmetrical, with good tone and should hang freely in the scrotum. Testes and related structures should be free of abnormal lumps or textures. The prepuce of the male should be clean and not ulcerated. Ewes should mother their lambs well with good milk production for rapid growth.

Comment: Reproductive function is critical to the breed without which the breed is of little utility. This includes milk production for females and testicular function and capacity for males, both of which are related to the conformation and textural quality of these organs.

Fleece: The breed is generally white but colored sheep occur and can range from black to “English Blue” (deep gray to silver). The fleece is long, curly, lustrous and heavy, with staple lengths from 8 to 14 inches. It is high-yielding and stylish with well-defined crimp. Generally softer and somewhat finer than Lincoln or Cotswold, it’s highly valued by handspinners and weavers for its handle and beautiful dye acceptance.  The fleece is dense, and grade and style are uniform over the entire animal. The wool is ideally silky and lustrous with a soft handle. Locks should hang individually, have medium crimp or wave and have no tendency for crossfibering. The wool should have a well defined crimp or wave over the entire lock, and should be a uniform texture from the skin to the tip. High luster is typical of the breed. Wool is clean and white with little tendency for yellowing. Colored spots in white fleeces are objectionable. The wool growth for one year varies from 5 to 14 inches. Fleece weights for ewes vary from 6 to 14 pounds, for rams 9 to 20 pounds. The fiber diameter is usually 32 to 38 microns, with a Bradford count of 40s to 46s.

Comment: The fleece of Leicester sheep is very distinctive and is an important part of the breed. Fleece characteristics set the breed apart from others and must be rigorously guarded.

Colored Sheep: Colored sheep are acceptable. Colored sheep are colored throughout the head and legs, and throughout the fleece. Colored sheep do not include white sheep with areas of colored fleece as these are objectionable in the breed. The colored areas of white sheep arise through genetic mechanisms that are a great risk to a white breed. The mechanisms for more uniformly colored sheep (some of which are attractively shaded over the body) are not a risk to a white breed, since the result is sheep that are either wholly colored or wholly white. Aside from color, the standard for colored sheep is as for white sheep described above. The usual colors in the breed are “English Blue” which is a shaded gray, and black.