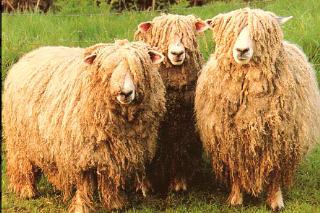 The Lincoln is one of the world’s largest breeds of sheep. Its fleece is the heaviest, longest-stapled and most lustrous of any breed in the world. Lincolns originated in a fertile area on the East Coast of England, bordering the North Sea and the county of Lincolnshire. They were first brought to the United States in 1825, where they contributed to the development of several commercially-important American breeds including the Columbia and Targhee.

Long-wool sheep appear to have ancestry from white-fleeced sheep imported to England from the European continent during the Roman occupation. Evidence of this body-type of sheep with similar fleece exists as figurines from the continent dating to the second century. The next evidence of long-wool sheep comes from Lincolnshire, appearing as a detailed illustration in the ‘Luttrell Psalter’ written between 1320 and 1340. In approximately 1460, a brass memorial with a curly-fleeced sheep was placed on the Northleach Church, Gloustershire.

Many of the ‘longwool’ breeds likely have a similar developmental history involving Lincoln and Leicester foundations. The distinctly hardy “improved” Lincoln evolved during the 1800’s toward the dual-purpose breed we have today. The “improved” Lincoln combined more quality meat with a higher quality of wool than the “old” Lincoln. Although the wool was of a finer diameter, it took dye very well and retained its strength for the combing and worsted spinning processes used at that time. It was this “improved” Lincoln that led to the accumulation of great wealth in Lincolnshire and surrounding counties for many decades.

In the latter 1800’s, the value of using the Lincoln in crossbreeding programs was recognized. Lincoln breeding sheep were exported world wide for upgrading local breeding stock. Breeds eventually developed by using Lincoln parents included Corriedale, Polwarth, Columbia, Bond, Armenian Semi-Course Wool, and Panama. From these breeds, second-generation breeds were subsequently developed in the US, such as Montadale and Targhee.

Breed Character – The Lincoln Longwool is an impressive, multi-purpose, heavily built, rugged, adaptable sheep with a calm and gentle disposition. The Lincoln yields a very long, lustrous, coarse, strong, wave common or braid fleece. The fleece is either white or colored. The colored fleece tends to be shaded in color with the darkest wool on the shoulders and legs and silver gray to black on the body.

The ideal white and colored Lincoln should have: