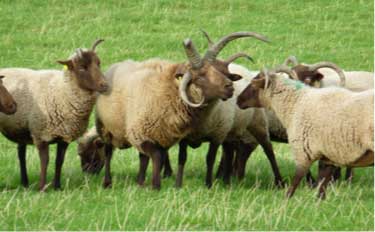 The Manx Loaghtan is found on the Isle of Man off the coast of Great Britain. It is member of the Northern Short-tailed group, similar to the Hebridean, but slightly larger. It’s wool is chocolate brown with paler tips. The Manx Loaghtan is descended from the primitive sheep once found throughout Scotland and the coastal islands of Britain.

Manx Loaghtan are horned with four horns being preferred. In England, the majority is two-horned. Individuals are also found with six horns. The horns are small on the ewes, but are larger and stronger on the males. They sometimes shed their natural colored wool in the spring. The meat is appreciated as delicacy and is protected by EU law.

Manx share the same breed origins as Soay, Hebridean, Shetland, Boreray, and North Ronaldsay.  Because of their relative isolation, they have escaped being replaced by more developed, larger breeds.

They have grazed the hills of the Isle of Man since sheep came to the isles.  But by the 1950’s numbers had shrunk critically low.  Thanks to a few select Friends of Sheep they are bouncing back as a source for gourmet meat and fine breed specific wool.

They are very athletic sheep that do well in parklands and meadows – but fences need to be very tall.  Like their feral Soay cousins, they leap anything shorter than 4’ pretty easily.  They have long legs and lean bodies.  They have multiple horns – much like Jacobs and Hebridean – in both rams and ewes, though occasionally less desirable polled sheep show up.  Manx Loaghtan re hardy and lamb easily, often having twins, particularly when left to themselves.

Originally, most of the sheep were white – some were black or grey and the “loaghtan” color we attribute to the breed was quite unusual.  Loaghtan is the Manx word for the brown “moorit” color of the fleece which is derived from two Manx words: “lugh” meaning mouse and “dhoan” meaning brown, or from “lhosht dhoan” meaning burnt brown.  As it turned out, textiles made from the loaghtan color was prized and that color won out in the marketplace and breeders selected out the more common colors, keeping the recessive loaghtan.

Today they should be of uniform color.  Sometimes a spectacled sheep shows up – this trait stems from cross breeding with Castlemilk Moorits in 1936 or some Soay rams in 1966 when they were trying to restore the breed, and is normally bred out of the flock.  Fleece type is highly variable – some short, some long, and all the original colors can be found in flocks so long as the color on a particular fleece is uniform and lacking white markings.

Some Manx retain the ability to roo – generally shedding their fleece in May based on weather conditions – but the majority are shorn.  The grease rise makes this complicated in ewes with lambs – and frequently results in a distinct line of thick grease at the butt end of a shorn fleece.

Manx Loaghtan sheep should have short hairy tipped tails with no wool on them, bare legs and faces.