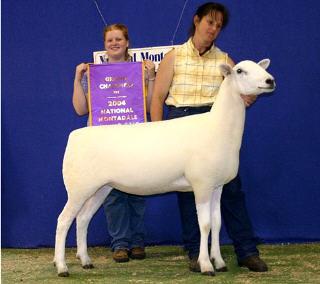 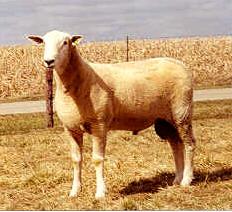 The Montadale was developed in the United States from Cheviot and Columbia crosses. E.H. Mattingly, a well-known commercial lamb buyer is given credit for developing the breed. His idea was to bring together the qualities of big western-white faced sheep and the popular mutton characteristics of Midwestern sheep. His result was a good meat type, dual- purpose animal with the head and legs free of wool and with the stylish appearance and agile body of the Cheviot.

For fifteen years, many of these Montadale lambs were carcass tested for characteristics which are now the standard in the industry, but which at that time were yet to become widely accepted as the ideal. The Montadale breed is considered a dual-purpose breed noted for producing both high-quality carcasses as well excellent wool.

Montadales are a medium to large-sized, white-faced meat breed which was developed in the United States in the early part of the 20th Century by crossing Cheviot rams on Columbia ewes. Montadales are extremely hardy and do well in all parts of the U.S. The ewes are easy-lambers and the rams are active breeders. Montadales are attractive and have a regal, stately appearance.

Montadales were the brain-child of an elderly Kentucky master shepherd, a leading breeder of Cheviot sheep, who passed the idea of a better sheep to a young teenager named E. H. Mattingly. Among the master shepherd’s many suggestions for carrying out the development of a new breed was the assumption that a Cheviot ram should be a part of the equation since it was known for its hardiness, vigor and vitality along with its small head, clean legs, open face, and high yielding choice meat quality. E. H. Mattingly would start the development of Montadales around 1930 using the Columbia breed which had been developed by the USDA in Laramie, Wyoming. Columbias are a large-framed, robust, wool-type sheep developed from a cross between the heavy, coarse-wooled Lincoln breed and the large, fine-wooled Rambouillet breed.

All animals should show straightness of lines and smoothness denoting quality. Animals should exhibit balance or symmetry with all parts blending smoothly together. All sheep should have adequate muscling.

Frame — Long-bodied animals with special emphasis on length from the last rib back and with enough length of leg to appear balanced are most desirable.

Feet and Legs — Legs should show good bone, well-muscled and set well apart. Pasterns should be short and straight.

Mouth — All animals should have a sound mouth with the teeth matching smoothly with the dental pad.

Back — The back should show a true level line and free of any low or weak spots.

Loin — Loin should be level, deep and wide with extreme length and well-fleshed.

Rump — A wide, level and long rump is most desirable.

Brisket — A medium-width brisket is most desirable and should be free of body folds.

Growthiness — All animals should show plenty of size for age.

Ears — Ears must be well apart and point outward.  Long ears are desirable.

Scurs — No signs of scurs is most desirable.

Color — A heavy coat of pure white hair on head and legs below the knee/hock is most desired. Black spots in hair covering are not objectionable. Some light, scattered brown hair is acceptable, but not desired.  Black hooves throughout are most desirable.

Pigmentation — It is desirable that visible skin areas other than those covered with wool or hair should show some pigmentation.  Older sheep sometimes develop pigmentation to the extent they appear to have grey skin beneath hair covering.

Wool — Fleeces should be of high quality. They should be bright, dense, uniform in grade and free from black, brown and hairy fibers. 3/8 and 1/4 blood are most desirable. Low 1/4 blood is undesirable. Sheep with fleeces that will grade common or braid are not eligible for registry. Sheep with fleeces that contain black or grey spots are undesirable but not disqualified for registry.  A 12-month fleece should show a minimum of a 4-inch staple.