Don’t let the photo fool you – these are the world’s smallest sheep!  Also known as Ushant or Breton Dwarf Sheep, the Ouessant is one of the smallest sheep breeds in the world. They originated on Ile d’Ouessant, a small island off the coast of Brittany, France. Most animals are black or brown in coloration with white individuals also occurring. The average thickness of their wool is 27 to 28 microns. It is suitable for suitable for fine knitting yarns and soft weaving yarns. Ushants are a dwarf breed with the males being horned and the females polled (naturally hornless). 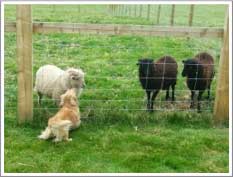 Ouessant come from the Island of Ouessant off the coast of Brittany.  It is believed that they are related to the northern short tailed breed and black is the preferred color – because the islanders prefer to wear black.  Originally there were two lines on the island, Morbihan and Vendeen, that eventually merged into the single line we know today.  They were nearly lost in the mid 1900 when some French aristocrats allowed them to graze on the land surrounding their chateaux. The dog in the photo is a long haired Dachsund!

Ouessant are curious and friendly little sheep standing no higher than about 19” tall at the shoulder for rams and 18” for ewes – about 3” smaller than Britain’s other tiny sheep, the Soay.  They are compact, efficient grazers and maximum weight for a ram is around 41 lbs.  The small size is attributed to poor grazing on the island – demanding the development of tiny efficient sheep.  Rams are horned – and their horns curl sharply forward.  Ewes are polled.

Such tiny sheep do not produce a large fleece – and yet their fleece does make a significant portion of their body volume.  The fleece is very thick, with a thick undercoat – so many examples will be dual coated.  Average fleece weights are 1.5-4# unskirted and all colors are acceptable.  Most colors will be shades of moorit and many of the white fleeces have a reddish undertone.  Average staple in a year’s growth is around 3”.

The wool generally extends onto the face – particularly the forehead and cheeks and will cover the legs to the hock.  The locks are somewhat open and hair and kemp will be present particularly near the legs and neck.  Hair will be of similar texture to the fleece and is often difficult to separate.