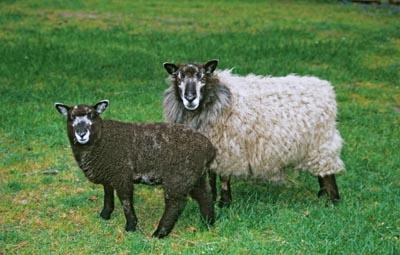 The Perendale was developed in New Zealand during the 1950’s at Massey University to meet the needs of hill country farmers on developing country. It is still a very popular breed in New Zealand. Developed from the Cheviot and Romney, the Perendale is a dual-purpose sheep producing a 28-32 micron wool with a 125 mm (5 in) staple length.

The Perendale is characteristically a high fertility animal, and has great potential to produce a prime lamb dam when crossed with the Merino. As a purebred, its hardiness makes it ideally suited to colder, high rainfall areas. The Perendale is easy to care for; the ewes have little trouble lambing and are good mothers.

In 1956 the first Perendales were bred by Sir Geoffrey Peren at Massey University by crossing a Cheviot over a Romney. The Perendale Sheep Society was formed in 1959 with the object of the advancement of this new and exciting sheep breed.

The Perendale breed is enjoying increasing popularity and the Society’s work now includes research, information sharing and marketing of the breed.

The Perendale is a sheep for all environments and is as successful on the hard hill country of the Wairarapa and Canterbury as on the fertile plains of Manawatu and Southland. The Perendale is rapidly replacing traditional breeds in the high country with great success.

The Perendale is an easy-care breed and will give your farming operation effortless lambing, good mothering and survival, plus excellent fertility with low losses from scanning to lambing.  The lambs are easily finished to produce a lean, heavyweight carcass ideal for the chilled trade.

While production is of major importance, type is also very important in the Perendale which has been designed as an active sheep, and this is a type which New Zealand will always need for its immense acreage of hill country. Any improvements must be grafted on to this type without impairing the essential characters of an active sheep – hardiness, the ability to move on hills with the minimum expenditure of energy, a digestion which can utilise rough and inferior feed, the constitution to stand up to severe climatic conditions and, at the same time, the ability to wean a good percentage of strong lambs.

History has shown that so-called “improvements” under-mined some essential characteristics of a breed. Introduced under very favourable conditions with the object of attracting the buying public as being a more profitable type, they so often have done a great deal of harm. This sort of thing must be avoided at all costs.

Do not think you can go on for ever improving your type. There must come a time when the type and production of the good ewes in a well established flock are in balance with the environment, supply and quality of feed. At that stage the principal aim should be to raise the standard of the poorer ewes in the flock. Only a major change in conditions, due, say, to a radical change in management, warrants a definite change in type.

Among the principal differences between its conformation and that usually laid down for a lowland, long-woolled breed are the high withers, as opposed to level shoulders, and the upright carriage for the head. These two features together with shoulders well laid back and the correct amount of spring in the pasterns, enable this breed to pick up their front feet easily. Given in addition a slight slope at the tailhead, which makes for maximum drive from the hind-quarters, and you have the basis of a type of conformation which makes it easier for the sheep to move, and makes possible the maximum freedom on the hills. This ease of movement results in an active, good walking sheep – one which has no hesitation in walking to the back of the highest and roughest block of country, if the feed is there, and is easily mustered.

Head:  A ram should express masculinity and alertness. Masculinity in a ram can be judged by its eye and general attitude, rather than by the size of its head. A ewe should show that intelligence and female character found in outstanding sheep.

Lowerjaw: Well developed, i.e. deep and with a square or broad form to allow for sufficient spacing and, therefore, proper development of the incisor teeth. The latter should meet the pad at right angles, and no definite under-shot or over-shot condition should be tolerated.

Nose: Slightly roman. This type of nose, together with more or less erect ears, are indications of that active alert character which it is so necessary to preserve, if you want “Easy Care” sheep.

Head Covering: The face should be open and white with a covering of fine hair, indicating a soft handling fleece. Black spots on the face, are not permissible in stud sheep. There should be no wool below the eyes, and the crown or poll should be covered with a top-knot.

Ears: Of short to medium size with a 10 to 2 setting, giving an alert appearance – an indication of alert and active character. Their texture and covering should be soft handling, as indicative of a soft handling fleece. Thin, pink ears are undesirable, as in all breeds, as they are liable to scald. Small black spots are permissible, if only a few, but are objectionable and to be discouraged.

Neck: Strong and should hold the head well up. This, together with the high winters and the setting of the shoulders, enables the sheep freedom of movement – a most important feature.

Shoulders: The withers should be higher than the shoulder blades, which should fit smoothly against the vertebrae. The shoulders be well laid back so as to produce the correct angle in the pasterns and to avoid any “straightness” in the front legs.

Back: The top view should be a wedge shape narrower in the shoulders with a wide back end. Since the withers are higher than in lowland breeds, and as there is usually a slight slope at the tailhead, the topline will not be so level from withers to tailhead. It is not discernible when the carcase is hung up and, therefore, does not detract from its value.

Chest, heart-girth and spring of ribs: The usual descriptions of these characters as for any breed of sheep apply equally to the Perendale with excessively deep briskets also contributing to lambing problems.

General: The ideal fleece will be composed of well formed and free opening staple. It will generally show clear cut crimp formation in the staple.  Even if staple crimp should be lacking, fibre crimp as opposed to plain straight fibre, is acceptable.

Without a doubt, fleece weight is the most important single factor in achieving maximum returns for wool. In selection for any other parameter, weight should come first if there is conflict. Fortunately many of the ideals for the breed are consistent with maximum fleece weight so conflicting situations are not too common.

In subjective assessment, full handling, long stapled wools indicate good fleece weight but in the final analysis only actual weighing gives the complete picture. While this may not always be seen as a convenient selection technique on commercial farms, all ram breeders should be using it, and significant gains will be made only when weighing is used as a selection and breeding tool.

In earlier years the standard set by the Society was for ewe wools 32 micron and finer down to 32-36 microns. This may have been unrealistic as all flocks continued to produce some coarser woolled sheep and, as breeders will testify, there was a commercial demand for such sheep.

In response to a drop in the price differential for fine wools, the Society widened the acceptable range to include 36 micron for ewes and 36-38 micron for rams. The situation now seems satisfactory, good sheep are being produced in this range and commercial growers on improving country can obtain the class of Perendale they require.

While those who stayed with the finer Perendales have not lost out, many clips have settled down to a 32-38 micron range and as such, grading into one sale line by the removal of cotts, harsh, short and faulty fleeces is satisfactory.

Clips with a finer element should benefit by classing out the fine wools to separate the carpet from the knitting wools. Hogget clips especially can benefit from classing or, in the case of the smaller clips, grading out the low end to leave a fine line. 33 micron and 32 micron are premium wools.

Staple length does affect value with increasing values up to 150mm and a rapid drop off from 75mm downwards. This should be borne in mind when planning second shearing. Over 75mm opens the way for second shear wools to be used by the semi-worsted process.

In breeding, the short, blocky, harsh Cheviot type fleece should be eliminated because of their shortening effect on the clip and because they are normally light weight types.

Tensile soundness in wool is a very desirable feature and is reflected in price. However, because of the task set so many of our Perendale flocks, foraging over second class hill or on developing blocks, it is inevitable that much of the wool will be tender. Fortunately, woollen yarn spinners who can utilise tender wool are aware of its bulking properties for carpet, blanket or knitwear yarns, and are using it.

However, soundness opens the wool to a much wider demand and where conditions allow, management practice should aim at avoiding, or at least minimising the stresses that cause tenderness and break.

Wool that will wash white is more versatile in use than stained wool and will normally be of higher value. To a great extent colour is at the mercy of the climate and environment.