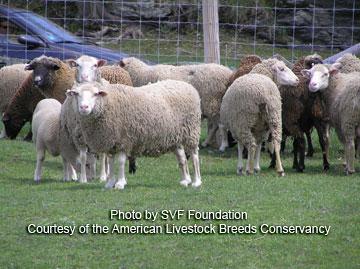 Santa Cruz Sheep are a critically endangered breed on the Livestock Breed Conservancy’s (nee the ALBC) list.  Named for Santa Cruz Island, one of the Channel Islands off the coast of California, these sheep have been on the island for at least 70 years and perhaps as long as 200 years. Local lore suggests that sheep were moved onto the island in the early 1800s when ranching operations on the island included sheep, possibly Merino and Rambouillet types with some Churro influences. Some of these animals escaped and a feral population was established. Over time, the Santa Cruz breed developed from these escapees, through the geographic isolation of the population and the pressures of natural selection.

In 1978, The Nature Conservancy (TNC) acquired ownership of nearly all of Santa Cruz Island. The feral sheep population had overgrazed the island and threatened the survival of indigenous vegetation. TNC began a sheep eradication program in 1980 in an effort to save the island ecosystem from further destruction.  The story of this program is gruesome and is a testament to the lack of understanding of the effects of “feral” sheep within an ecosystem.*  Thankfully, The American Livestock Breeds conservancy was able to convince TNC that the sheep needed saving and a cooperation program began with 12 lambs removed from the island.  The sheep were placed with five California breeders and a conservation effort was begun. ALBC member Earl Crews brought additional animals off of the island in 1991. The mainland population has now increased to about 125.

Like many other island-adapted animals, the Santa Cruz sheep are small in size. Most of the sheep are white, but black, brown, and spotted sheep are also found in the population. The fleece is fine to medium and very soft. Sheep have little or no wool on their bellies, faces, and legs, and many have short, woolless “rat” tails.  The wool is extremely crimpy and elastic, displaying lycra™ like characteristics and is best when combed.  Santa Cruz sheep are exceptionally hardy. 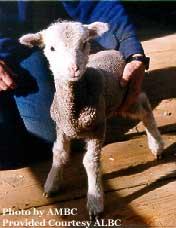 The Santa Cruz Island sheep breed is an important genetic resource. Its historic background, long period of isolation, and adaptation to a challenging environment have given the breed an array of characteristics not found among commercial breeds. Conservation outside of its native environment is not ideal, because changes in selection pressure will gradually change characteristics, but it provides the only opportunity for the breed to survive. The American Livestock Breeds Conservancy has begun a conservation program for the sheep, including the collection of semen from the original island-caught rams. Semen can be used in the future if needed to reestablish original traits.