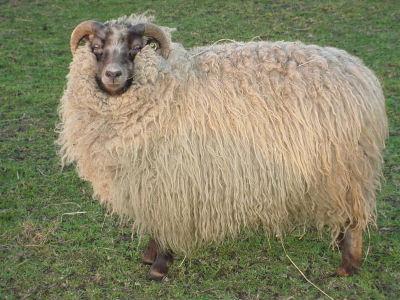 The Shetland’s roots go back over a thousand years, probably to sheep brought to the Shetland Islands by Viking settlers. They belong to the Northern European short-tailed group of sheep, which also includes Finn sheep, Icelandic sheep, and Romanovs. The Shetland is a primitive, unimproved breed noted for its natural hardiness, lambing ease, longevity, and ability to survive under harsh conditions. It is one of the smallest breeds of sheep.

Shetlands are known primarily for their production of colorful wool upon which the Shetland woolen industry is based. Shetland comes in one of the widest ranges of colors of any breed. There are 11 main colors as well as 30 markings, many still bearing their Shetland dialect names. Shetlands naturally shed their wool during late spring/early summer.

Classified as a primitive breed, Shetlands are small, fine-boned sheep belonging to the Northern Short-tailed group. They have adapted to the topographic and climatic conditions of Shetland for over a thousand years. They are very hardy and have the ability to thrive on low levels of nutrition. They are prolific with a prolificacy of about 160%. They are highly adaptable and succeed well in less rigorous conditions off the Shetland Islands. There is a considerable variation in height and weight of sheep depending on feeding conditions. For example hill sheep in Shetland, out-wintered as lambs, have a live weight of about 22kg whereas a park-fed ewe in the south of England averages 45kg. A ram in peak condition could weigh as much as 65kg.

Rams may be horned or polled. Ewes are normally polled but occasionally may develop short horns that curve backwards. The horns of the ram can be round or angulate in section, with transverse wrinkles. They rise above the head in an open spiral with the tips directed outwards. They are set well apart at the base, ideally one to two inches. A ram with heavy angulate horns may have a narrower base. Four-horned rams have been recorded and photographed but are rare.

A special feature of the head is the straight facial profile, but with a distinct hollow between the cheek and nose. The eyes are protuberant and set well apart – about three-quarters of the distance between the nose and the top of the head. The ears are small and fine, set well back on the head and carried slightly above the horizontal. Small amounts of wool are normally present on the forehead and almost always on the cheeks. A straight and level back and a well-rounded rump are indicative of the general quality of the sheep. The tail has 13 vertebrae, much shorter than commercial sheep that have 26 vertebrae. It is fluke shaped, broad at the base and tapering for three quarters of its length then continuing without further narrowing to a flattened tip. The upper portion of the tail is wool covered, but there is hair at the tip. The tail length varies in keeping with the size of the sheep, but is usually between 4 and 6 inches. This characteristic can sometimes be passed on to crossbred lambs.

The most important attribute of the breed is its wool, which is the finest of all native breeds and which shows an amazing variety of colors and patterns. There are 11 main whole colors and 30 recognized markings. The fleece tends to be shed in spring. At this point the fleece can sometimes be plucked or rooed by hand. The fleece weighs from 2 – 3lbs.

As a pure breed they produce very high quality lean meat with outstanding flavor and fine texture. When crossed with a suitable terminal sire the heavier, faster maturing lamb is readily acceptable at markets.

The following list summarizes the features of the breed and the benefits which arise from these features.

The History of the Breed

There is archaeological evidence that primitive sheep of the Soay type were kept in Britain by early Neolithic farmers over 4500 years ago. Horns of the Soay type were found during the excavation of Jarlshof, a noted prehistoric site on Shetland. The current Shetland gulmoget has Soay or Mouflon markings suggesting that these early sheep contributed to their genetic makeup.

Norwegians settled in Scotland and the Northern Isles around 500 AD. It is likely that they brought their own sheep to add to the Soay types and other sheep already there. Shetland sheep share many similarities with the Spaelsau and Vilsau sheep of south western Norway. There are wild sheep on the small islands off Bergen which resemble the double coated and patterned Shetlands of Foula, an inhabited island off the west coast of mainland Shetland.

Around 1200 AD the original short-tailed sheep were still present in the Northern Isles though crossing with the Roman sheep was producing distinct varieties. In the ensuing years these Northern Short-tailed sheep continued to develop into distinct breeds in isolated locations. People on Shetland may have been selecting, either directly or indirectly, for soft and fine wool from very early on in this period.

Early in the seventeenth century stockings were hand-knitted from hand-spun wool on Shetland for trade to the Dutch and English. However, in 1786 sheep scab, introduced through cross breeding experiments, devastated flocks throughout Scotland, including Shetland, reducing the amount of high quality wool available for the knitting industry. At the same time meat breeds of sheep with coarser wool were moving northward through Scotland and into the Northern Isles. Crossbreeding and changes in husbandry motivated by meat production had a negative impact on the quality of much of the wool produced.

For the next hundred years or so the Shetland wool industry waxed and waned in response to political and market forces but basically maintained its reputation for superior quality wool and lace work.

By the early 1900s, markets for lace work were disappearing but hand knitted garments were increasing in popularity. Knitters throughout Shetland adapted again to produce the richly patterned Fair Isle sweaters, hats and mittens. This industry was itself soon perceived to be threatened by a reduction in wool quality caused by cross breeding to improve carcase quality and so, in order to preserve the uniqueness of the Shetland breed, in 1927 the Shetland Flock Book Society was formed on Shetland. A Breed Description was drawn up and is still in use. The Shetland Flock Book Trust administers the sheep’s welfare for island residents to this day.

Since the 1970s, breeders on the UK mainland, adhering to the Shetland Flock Book Society Standard and tradition have bred to maintain a fine-woolled single-coated phenotype that probably reflects the best that Shetland had to offer. Early in the 1970s the quality of the sheep kept by mainland breeders was very variable in terms of conformation and fleece quality. It was not until the late Dr SHU Bowie became involved and suggested ram inspections to get sheep consistently closer to the Breed Standard that progress was made.

In 1977 The Rare Breed Survival Trust classified Shetland Sheep as Category 3 (Endangered). However, by 1985, the popularity of the breed on the mainland, particularly with smallholders interested in the range of colors and the fineness of the wool, was such that they were re-classified as Category 5 (Above Numerical Guidelines). In the 1990s the classification of the breed was revised to a Minority Breed. In 2002 Shetland sheep were removed from the RBST list of supported breeds.

At the present day the breed on the UK mainland is in a healthy state both numerically and in terms of quality and conformation to the Breed Standard. In 2008 1031 lambs were registered by 149 breeders from 822 ewes and 228 rams. 36 new rams were approved by the society inspectors. Majority colors were Black, moorit, grey and white, Katmoget being the most common marking. Some colors and patterns are still rarely encountered and work is underway to identify and conserve these.

The exceptionally fine soft wool of the Shetland sheep is the finest of any British breed. It is used to produce gossamer lace, the famous ‘fair isle’ knitwear, and fine tweeds. The Society’s Shetland fleeces are frequent prizewinners and have been exported to handspinners in the USA and Japan.

There are eleven main whole colors in Shetland sheep, with many shades and variants in between. The eleven whole colors are shown in the images below, which are taken from photographs by the late Dr SHU Bowie. There are two samples of Shaela because of differing meanings in different parts of the Shetland Isles.

More than 30 recognized markings have been identified. An excellent review of color and marking genetics in Northern Short-tailed Sheep can be found on the US Primolana Shetlands website. This small selection of pictures shows a few of the markings found in members’ flocks.

Krunet = Dark colored with a white patch on the top of the head.

Smirslet = With white around the mouth head or neck.

Yuglet = Having color around eyes different from remainder of the body.

Bleset/Sneedled = Dark colored with a white stripe (blaze) down the forehead.

Bielset = Having a circular band of a different color round the neck.

Gulmoget = Having light underparts with a dark colored body, white inside the ears and under the jaw.

Katmoget = Having a light colored body with dark belly and legs and a moget face. The reverse of Gulmoget.

Bioget = With a white back and darker sides and belly, or vice-versa.

Blaeget = Having a lighter shade on the outer part of the wool fiber, especially in moorit and dark brown sheep.

Blettet = With white patches on nose and top of head.

Brandet = Having stripes of another color across the body (i.e. going over the back).

Kraiget = Having the neck a different color from the rest of the body.

Kranset = Dark colored with white around eyes and head.

Mirkface = White with dark patches on the face.

Moget-faced = Applied to the characteristic face markings of the Katmoget pattern on sheep not otherwise displaying that pattern.

Mullit = White with dark nose and jaws – the reverse of Katmollet.

Flecket = White with large black or brown patches (not as well defined as in Jacob sheep when in full fleece).

Ilget = White with spots of a different color (usually grey or black).

Iset = Black or shaela with many white fibers, giving a bluish hue from a distance.

Sholmet = Of any color, other than white, with a white face.

Skeget = Stripes of different colors on the sides, not going over the back.

Sokket = With legs of a different color to the body – giving the effect of wearing socks.

In 1996 a survey was made of members’ sheep having recognized or other markings. Information was returned as sketches of the location, nature, and color of the sheep’s markings. Our poster shows 63 of the variations sent in. Some of these, e.g. gulmoget, brandet, are particularly uncommon. 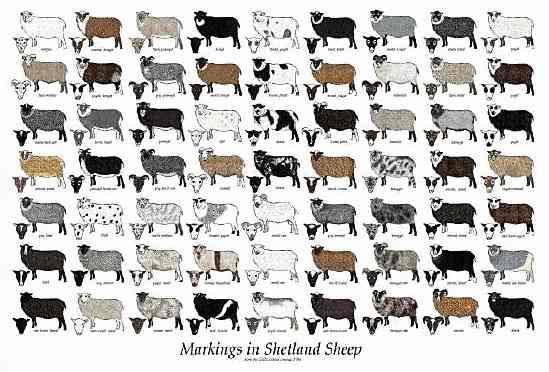