Shropshires are a good, middle-of-the-road sheep, medium to large in size, with dark faces and wool on the legs. They originated in central western England in the counties of Shropshire and Stafford from native stock, Southdown, Leicester, and Cotswold crosses. First imported into the United States in 1855, until the 1930’s, the Shropshire was the most popular and influential breed in the country.

Called the “Ideal Farm Sheep,” Shropshires were boasted to have “wool from the tip of the nose to the tip of the toes.” Over the last few decades, Shropshires have evolved into a very modern and productive breed, perfect for families with youth projects.
Breed categories: medium wool, meat

The exact origins of today’s Shropshire Down are unclear but generally agreed to be as a result of the improvement of the indigenous sheep of the Staffordshire and Shropshire border areas. These were hardy stock, not prone to footrot or scab, and produced wool of a superior quality. The fleece however only weighed about 2 – 2.5 lbs and the sheep were slow to mature to a suitable butcher’s weight. Following the achievements of stockbreeders such a 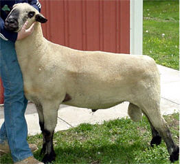 During the 1950s a few progressive breeders thought that the Shropshire needed to return to the characteristics that earlier made them so popular. These breeders imported a select group of rams from England to breed larger, more purposeful animals with open faces. Over the last few decades, Shropshires have evolved into a very modern and productive breed, perfect for families with youth projects. Today the Shropshire breed has continued to establish itself as a leader in the industry by becoming the first black faced, slick sheared breed.