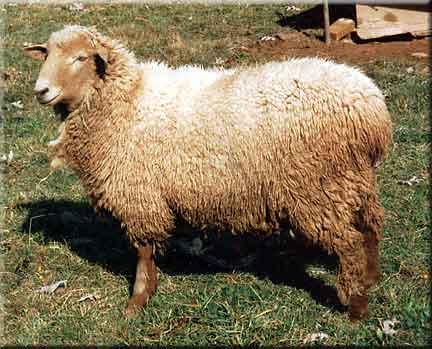 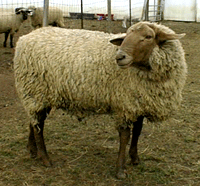 The Tunis is one of the oldest sheep breeds, said to have roamed the hills of Tunis and parts of Algeria in North Africa prior to the Christian era. The American Tunis evolved from a number of importations of fat-tailed sheep from Africa and the Middle East that were crossed with established European breeds to improve the breed’s meat characteristics.

The earliest documented importation occurred in 1799, a gift to the U.S. from the ruler of Tunisia and entrusted to the care of Judge Richard Peters of Pennsylvania. One of the largest advocates of the Tunis breed was Thomas Jefferson, who owned a fairly large flock. The breed could have been a major breed in this country if most of the southern flocks had not been destroyed during the Civil War.

Tunis are a unique looking breed with an unusual color of reddish tan hair covering their legs, faces and long pendulous ears and minor fat deposits over the dock area. The Tunis is classified as a “rare” breed by the American Livestock Breeds Conservancy.

The first, and most striking thing you will notice about Tunis sheep is the beautiful red color set on an attractive sheep with long pendulous ears and a calm disposition.

Within this medium-sized package is found a very productive sheep.  Tunis are very feed efficient, requiring less feed than larger breeds to produce marketable lambs at the same weights within similar timeframes.  The ewes are excellent mothers who have a high rate of twinning, are heavy milkers, are productive for much of their long lives, and are easily handled with very docile temperaments.  The Tunis lambs are vigorous at birth and are warmed by a double coat of red fibers.  An extended breeding season can be expected – in fact some Tunis will breed out of season producing fall lambs.

Tunis carcasses yield a high percentage of meat thanks to the breed’s fine but strong bone structure and length of hind-saddle.  And the Tunis sheep breed excels on pasture. In fact, due to their desert ancestry, Tunis will survive where many other breeds would starve and are very heat tolerant. The rams are also noted for their libido, being quite active when young and even during hot weather.

Our modern Tunis sheep originated by combining Middle-Eastern fat-tailed sheep imported from Tunisia, on the Northern coast of Africa, with sheep locally available in America around 1799. This makes them among the oldest breeds of livestock developed in America. The first known imported pair, a gift from the Bey of Tunis, was placed with Judge Richard Peters of Belmont, PA, who made rams available and gave away lambs to spread the breed. Throughout its long history in America the breed has been associated with many prominent figures like George Washington Custis, Judge Richard Peters, James A. Guilliams, Maynard R. Spigner, Colonel Washington Watts, and Charles Rountree. It is not insignificant that many of these men were members of the Philadelphia Society for Promoting Agriculture.

The Tunis offers some very unique potential for those using it in an out-crossing program. The Tunis has the ability to stamp its feed efficiency onto its crossbred offspring; half Tunis lambs are noted for great weight gains, great feed conversion rates, and fast finishing. In particular, the Tunis-Dorset cross produces one of the best market lambs obtainable. Also, retained ewe lamb from this cross can be bred anytime of the year and seem to excel in mothering traits above even pure Tunis or Dorset ewes (two of the best breeds for mothering characteristics).

Tunis sheep are also noted for the fine flavor of their meat.  It is said that Tunis mutton tastes as good as lamb of other breeds. Many find Tunis mutton superior.  Tunis lamb has a long history of being sought after for its delicate and fine flavor.  In fact, in the early 1800s Tunis lambs were the most sought after in the hothouse lamb markets around Philadelphia.  Another bonus of Tunis cross lambs is that they inherit the improved flavor of meat that the Tunis is uniquely noted for.