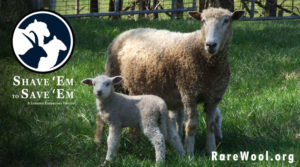 You’ll notice a theme throughout 2019 here at The Spinning Loft and elsewhere: Heritage Breeds.

In 2019 the Livestock Conservancy is challenging fiber artists to “Shave ’em to Save ‘Em” by encouraging them to spin and work with as many Heritage Breed fibers as possible.  As you all know – The Spinning Loft has carried and featured these breeds for years and this year we will be among the providers supporting their challenge.  Our stamps are on the way and the initiative launches very soon.

Heritage breeds are amazing.  A few of their many benefits include: wide genetic diversity, improved hardiness, a wider variety of wool textures and applications, wider range of habitat, key niches in ecosystems, more vigorous health and resistance to disease, and improved lambing.  Also, if you eat lamb, they also have more diverse flavor.

Most frequently we encounter Heritage breeds as part of a cross.  For example, dozens of breeds, some of which are now heritage breeds, trace their origin to Leicester Longwool which began with the now extinct 18th century Dishley Leicester.  The Leicester Longwool is a common sight in such places as Colonial Williamsburg where they are used in historical re-enactment, breed preservation, and textiles because they are the sheep brought to Williamsburg by the Colonial settlers.

So what is a Heritage Breed?

Well, it’s quite simple really.  A Heritage Breed is a breed of one of the seven traditional US livestock species that has been raised since pre industrial times and breeds true to type; each generation retains the traits of its forebears.  They were adapted over time to their local environments, and retain essential attributes for survival and self-sufficiency – fertility, foraging ability, longevity, maternal instincts, ability to mate naturally, and resistance to diseases and parasites.  They are truly multipurpose animals.

They also face extinction due to cross breeding.  Many of these breeds were and are used to impart their desirable genetic traits into other breeds.  A shepherd who wants a disease resistant but very wooly sheep is likely to cross a very disease resistant Heritage Breed with something like a Merino to get more wool with greater disease resistance.  The danger of industrial breeding, of only considering these breeds as part of a cross or only crossing them for spinners’ fleeces and flocks, is that they are dying out.  Breeding back is not a solution because once other genetics have entered the mix, you no longer have the original characteristics and will never get back to what is truly the Heritage Breed.  We must preserve them while we can.

The Livestock Conservancy is the organization in the United States which monitors, raises awareness of, and promotes Heritage Breeds in an effort to save them from extinction.  They work with breed organizations to monitor registrations, shepherds and state agricultural organization to spread the breeds around and foster them.  They are truly amazing and they have a counterpart in the UK known as the Rare Breeds Survival Trust.  Some of the breeds on the American list are also on the British list.

Annual breed registrations indicate overall active livestock breeding populations and a Heritage breed gets on the list when its annual registrations of new births falls below a certain level.  If the breed is a landrace, which tend not to have a breed association, the Conservancy reaches out to shepherds directly.  The idea is to track those populations of livestock which will result in future generations and retain breed integrity.

While the Conservancy has a solid list of characteristics to determine what breeds get on the endangered list, we are mainly focused on sheer numbers.  There are 5 classes on the Conservancy list:

The Spinning Loft is proud to work with shepherds and stock all but five of the sheep on the Livestock Conservancy list.  Two of those are hair sheep – which while technically spinnable, is not very friendly to the hand spinner.  Three are breeds I struggle to find entirely.  Locating both shepherds and fiber which is in spinnable condition for my clients is a huge challenge for these three breeds.

Heritage breeds are endangered breeds, many of them critically, and without additional outlets for the shepherds they will be abandoned in favor of wool and meat that meets standards of industrial production.  In some cases, such as Santa Cruz and Gulf Coast, there are fewer than a few hundred of these sheep globally.

When you seek out these breeds to create your textiles, you take a tangible and concrete step in saving them for future generations and in promoting diversity in our environment.

1 thought on “The Importance of Heritage Breeds”